Amador City and County are named for Jose Maria Amador, a wealthy California rancher who mined along the Amador Creek in 1848. It was 1851 that the settlement of Amador City began, after gold outcroppings had been prospected on both sides of “Amadore’s Creek,” several hundred yards upstream from downtown. The “Original” or “Little” Amador Mine (north) and the Spring Hill (south) were probably Amador County’s first gold mines. The city’s most productive mine, the Keystone, produced about $24 million in gold!

The creek, the town, and the county all take their name from the same man, Jose Maria Amador, a rancher and miner.  On August 17, 1835, Jose Maria Amador was granted an immense 16,517-acre tract of land known as the Rancho San Ramon, where he settled down and built one of the few two-story adobes in California.  Amador began producing leather, soap, saddles, blankets, shoes, and wagons and was soon one of the wealthiest rancheros in the province.

When word of the gold discovery at Sutter’s Mill reached Rancho San Ramon, Amador decided to visit the place and see what it was all about.  Traveling with a Frenchman named Sausevain, they reached Sutter’s Fort at about eight o’clock in the evening and met Sutter, who provided a cordial reception and served a good dinner and liquor of excellent quality.

When they arrived at the mill the following day, the two men walked down to the American River, took out their pans, and commenced mining for gold.  Their first efforts were somewhat discouraging, averaging only about 75 cents per pan.  Disappointed with these results, they headed for Mormon Camp, where the miners were getting about an ounce of gold to each of two shovels full.  They then returned home, but before long they would be back.

Amador and his party were not the only miners on the creek during those early days.  A party of men from Oregon built two cabins and stayed during the winter of 1848/49.  James Wheeler and his four partners built a large double cabin in the fall of 1849, as did a company from Virginia who also kept a stock of goods available for sale.  A company of miners from New York was camped along Amador Creek by the end of 1849, which Bayard Taylor describes as being “lined with tents and winter cabins”. 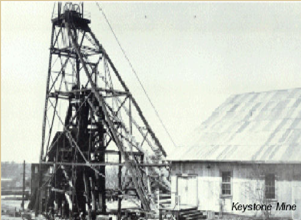 The foundations are located just a few steps south of the south end of the parking lot on the east side of Main Street (Old Highway 49).

The crumbling stone walls are all that remain to mark the site of the Wildman mine’s easternmost shaft, known as the Emerson.  The Wildman mine, in combination with the Mahoney, is credited with a production of $5 million in gold.

Keystone is located within the city limits of Amador City.  During the early period of operations, much high-grade ore was produced so that dividends as high as $550 per share per month were declared.

By 1888 most of the high-grade ore had been exhausted.  Mining operations continued until the mine closed in 1919.  From 1911 to 1919, the Keystone Mining Company operated the mine.  In 1920 the company gained control of the South spring Hill mine adjoining the Keystone property on the east side.

In 1933 the Keystone was reopened by Keystone Mines Syndicate.  Production was underway by 1935 and continued until the fall of 1942 when the mine was closed down by governmental order L-208.

Ore was first crunched at the Keystone and then trucked to the Original Amador mine where it was milled and cyanided.  Just prior to the closing of the mine in 1942, about 100 men were employed at the mine and mill.

In 1920 the Keystone Mining Company gained control of the South Spring Hill mine which adjoins the property to the east; however, very little was done until 1933 when the Keystone was re-opened by the Keystone Mines Syndicate.  After two years of rehabilitation and development work production was underway in 1925 and continued until the fall of 1942, when the Keystone, as all other gold mines, was closed down by government order.  During this final seven years of operation about one million dollars in gold was produced.

With the exception of a small amount of work done in 1952 in the neighboring Wonder mine just east of the main shaft, nothing has been done at the Keystone since the beginning of World War II.

Other than that little else remains.  The surface works have been junked.  The shaft has caved.  The famous old Keystone is now just another abandoned mine. 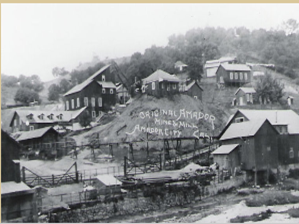 The Original Amador Mine (Little Amador) is also located in Amador City, which can be seen well from the Amador City School House.

This mine was discovered by Thomas Rickey and his son.  This was one of the first mines to pay dividends in Amador County.  In 1854 it exchanged hands to some Germans, who ran it until 1857.  After the mine began failing, the work ceased in 1858.

The mine was sold to Haverstick and Leninger from Ione for only $250.  Leninger then leased the mine to J.T. Burke, who gave him fifty percent of the profits.  By 1862, the work ceased again but did make Leninger an $8,000 profit.

The mine was sold to a John C. Fane and the hoisting works and mill were rebuilt and the mine began to produce.  The mine then sold again to an English company for $6,000.  A 40 stamp mill was completed in 1872.  This company actually spent more than they made.