Known as the Jewel of the Gold Country, Sutter Creek is a postcard-perfect mining-era town situated in the center of Amador County. Offering an eclectic mix of retail shops showcasing everything from clothing, artisan jewelry, and original art, to outdoor equipment and handcrafted furniture, Sutter Creek has something for everyone. Several restaurants, a handful of wine tasting rooms, and comfortable bed and breakfast inns are sprinkled along Main Street, making it a perfect romantic weekend getaway.

Sutter Creek is situated on Historic Highway 49, between Jackson and Amador City.

Originally the home of the Miwok Indian tribe, the area was forever changed by the discovery of gold along the banks of Sutter’s Creek by a millwright named James Marshall.
Legend has it that settlement started because of a single tent raised there for miners to use on rainy Sundays when they could not get to Jackson or Drytown. Sutter Creek truly established itself permanently when gold quartz was discovered in 1851. 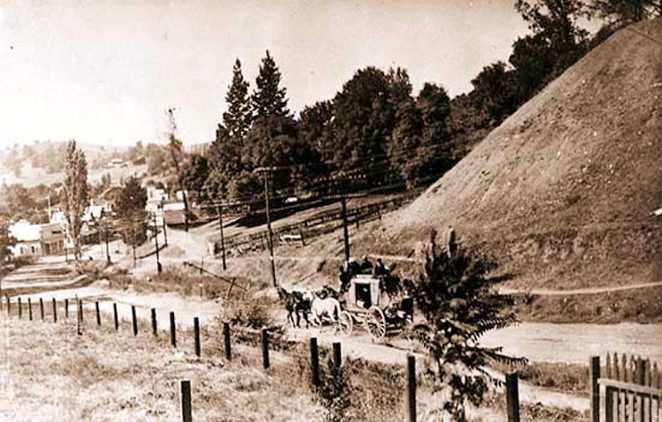 The town takes its name from the creek….the creek takes its name from John A. Sutter.  Unable to stop the tide of gold-seekers flowing over and destroying his lands, Sutter decided to follow the call of gold, trying in vain to recoup what the Gold Rush had taken.  Sutter arrived here in 1848 with a band of Kanakas and Natives, and upon finding a likely spot began mining along the creek.  A small settlement began to grow, centered around a cloth tent where the miners met on rainy Sundays when they couldn’t go to Drytown or Jackson.  The place eventually took the name of its most prominent citizen and was called Sutter’s Creek, Sutter, Sutterville, and finally, plain old Sutter Creek.

But Sutter wasn’t a miner, and many of the other miners in the area didn’t much approve of his using servants to dig for gold.  He left the area a short while later, returning with his men to Sutter’s Fort.  He never mined again.  The camp appeared to be on the verge of disappearing by 1850, due to the poor placers and the better diggings to be found elsewhere.  This changed dramatically in 1851 when rich quartz deposits were discovered near camp.  With the advent of quartz mining, Sutter Creek became firmly established as an important quartz mining center as well as a foundry center and supply point for the neighboring quartz mines and towns.

The post office came to town in 1852, with Dwight Crandall serving as the first postmaster.  Other businesses included an Adams Express office, stores, saloons, hotels, bakeries and restaurants, doctors, lawyers, blacksmith, barber, and numerous other professions, sordid and mundane.  In September of 1854, Sutter Creek incorporated as a town which shows there were at least two hundred inhabitants at that time, as that was the required number for incorporation.

From that point on the town never looked back, enjoying immense prosperity for tears to come due to its location in the midst of some of the most active and profitable deep quartz mines in the Gold Country. 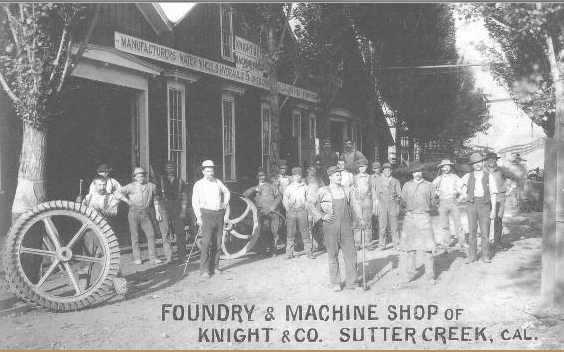 There was a time when the foothills of Amador County bustled with activity.  The lure of gold, copper, and other treasures sent men into the earth in droves, so that it often seemed there was more activity under the ground than at the surface.

Tools and machinery were needed to make mining possible.  Stamp mills, hoist works, pumps, ore cars, dredger buckets, rock crushers, and many other types of equipment had to be manufactured.  If the mines were to operate, so must a foundry to cast the metal parts and a shop to machine them to final form.

Historic Knight Foundry, in Sutter Creek, is believed to be the only remaining water-powered foundry and machine shop in the United States.  Originally formed as Campbell, Hall & Company, the foundry was established in 1873 to better fill the ever-growing needs of the Mother Lode mines, and to produce the patented Knight water wheel.

From 1970 to 1991, in addition to supplying new and replacement equipment to the mining and timber industries, it produced machine parts for other manufacturers of pumps and agricultural equipment.

Knight experimented with high-pressure wheels and eventually patented his design in the early 1870s.  Samuel Knight died of pneumonia in 1913.  He left a portion of his estate to his sister in Maine, but a major portion of the foundry operation was left to the employees. 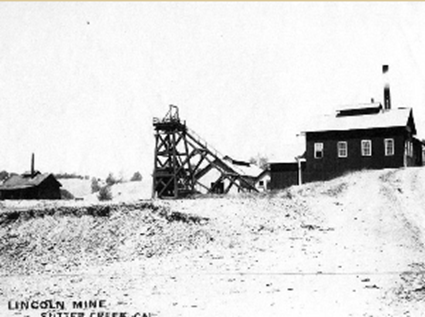 In the 1860s the Lincoln was worked through two shafts and produced 3,500 tons of ore per year.  By 1888 most of the high-grade ore had been exhausted.  Mining operations continued until the mine closed in 1919.  From, 1911 to 1919, the Keystone Mining Company operated the mine.  In 1920, the company gained control of the South Spring Hill mine adjoining the Keystone property on the east side.  The investment paid off, with the Lincoln Mine locating a rich vein and estimated to have produced over 100,000 ounces of gold.

One of the major shareholders was Leland Stanford.  Stanford sold his shares, and taking his mining fortune went on to become a builder of the transcontinental railroad, governor, senator, and founder of Stanford University.

In 1906 the Lincoln Consolidated Mining Company acquired the Mahoney and Wildman Mines.  The Wildman and Mahoney were estimated to have produced about 72,l50 ounces of gold, creating a combined total of over 172,500 ounces from the three mines by 1900.  At closure, the Lincoln, Mahoney, and Wildman shafts had reached depths of 2,000 feet, 1,200 feet, and 1,400 feet.