As one of Amador County’s smallest communities, the “village” of Volcano, as the locals call it, sits in a bowl-shaped valley and is home to two historic hotels, both with restaurants, a handful of small shops, a theatre company, and approximately 100 or so residents. A quiet hamlet now, Volcano was once a booming gold rush-era town boasting more than 10,000 residents. Today, Volcano is home to a popular outdoor amphitheatre owned by the Volcano Theatre company, which performs plays outdoors, and in the company’s sister location, the Cobblestone Theatre, directly across the street. 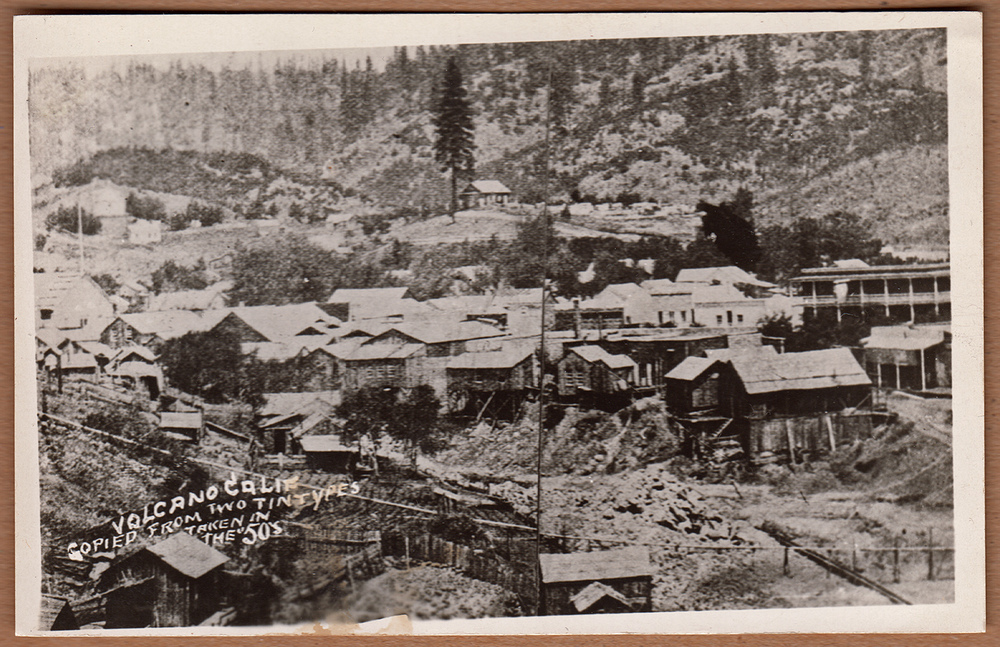 Who the first men were to mine this region is not known for certain, but legend has it that among the earliest were members of Stevenson’s Regiment who chanced upon the diggings in 1848.  They found the placers exceedingly rich, averaging $100 a day per man, with some spots yielding up to $500.  The claims in Soldiers Gulch were paying so well that no one took the time off from mining to build any kind of permanent shelter.  So when the first snows began to fly, most of the men packed up their gear and headed for friendlier climates.

A few of the soldiers; however, decided to dig in for the winter, undoubtedly hoping to continue working the rich placers and build up their stakes.  But the winter proved cruel, and without substantial protection from the storm or adequate supplies, the soldiers perished.  Their bodies weren’t discovered until several years afterward, at which time they were buried on Graveyard Hill.

With the melting of the snows and the opening of the trails, it wasn’t long before the diggings at Soldiers Gulch were once again jumping.  An immigrant named Jacob Cook came upon the valley in 1849, which he described as “a natural beauty spot, covered with leafy white oaks of immense size, and carpeted with grass, three to five feet high, having the appearance of an old English park.”  While the miners may not have noticed the natural beauty of the spot, blinded by their search for gold, they did notice the strange, burnt-looking rock formations and the fact that the camp seemed to be located in the crater of a huge volcano.  Someone dubbed the place Volcano and the name stuck.

The surface gravels paid handsomely, and to the miners’ surprise, the claims seemed to get richer the deeper they went.  Men picked out large nuggets with only their fingers as tools; the diggings were easy. Until they hit a layer of disquieting yellow clay.  Sure, there was gold in the clay, but it was almost impossible to get out.  Discouraged, several claims were abandoned which later turned out to be worth fortunes when methods of separating the gold from the clay were discovered.  Boiling was found to disintegrate the clay, so boilers were built to steam out the gold.  Another method was to let the clay dry in the sun, after which it was an easy matter to pound it to dust and extract the gold.  One miner is reported to have taken out $8,000 in only a few days, another took out twenty-eight pounds from a single pocket.  With returns like these, it’s easy to see how the region produced the $90 million credited to this area.

By 1865, most of the gold was gone, and so were most of the people.  Volcano had suffered its share of fires over the years, and in 1868 the problem seemed epidemic.  Property values had been dropping steadily since the end of the Civil War, but many of the businesses were heavily insured from earlier, more prosperous times.  Numerous fires broke out that year, prompting a rumor that the property owners may have had something to do with time.  The buildings which burned were not rebuilt, the owners simply left and the town slowly settled down to a more prosaic way of life that it still experiences today. 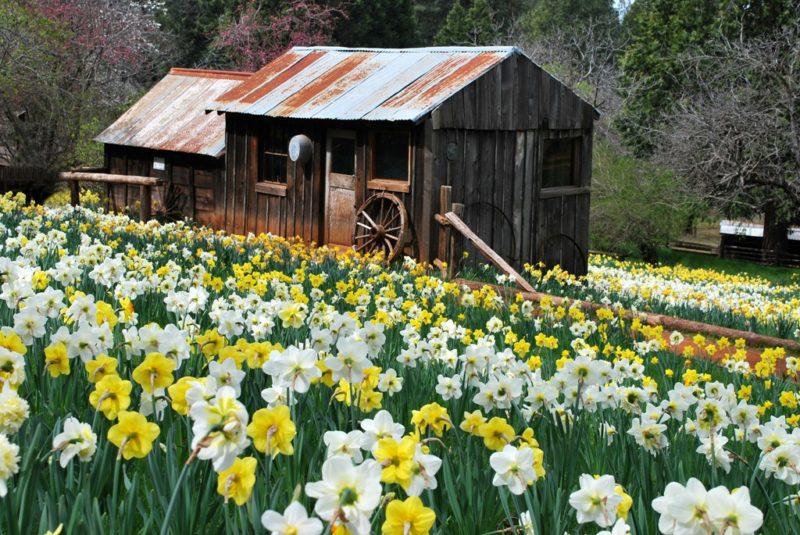 The ranch was purchased from an old Dutchman, Pete Denzer, who had planted around the home site daffodils from his native land.  These yellow blooms were Lizzie’s most prized possession, and she divided and replanted the bulbs each year to increase the size of her garden.

At the time the ranch was purchased it was used as a way-station for teamsters and travelers using the road from Kit Carson Pass over what is now known as California State Highway Route 88.  The McLaughlins continued the way station, renting rooms and serving meals to the travelers, and providing feed and shelter for their animals.  For many years the loft of the barn was used for “Saturday Night” dances at the ranch.

After Arthur and Lizzie’s death, the family decided to plant other daffodils in memory.  Daffodils were planted every year,  just a few at a time – and soon people began to stop to admire the blooms.  As groups of tourists grew, so grew the plantings until the few hundred planted annually grew to a few thousand.  Now every year five to six thousand new bulbs are planted – both daffodils and tulips.  There are approximately 6 acres in daffodils – 300 varieties and 400,000 blooms.

Each year, from approximately mid-March to mid-April, 7 days a week, weather permitting, the Hill is open to tourists.  They come to wander the planted hillsides, gaze at the farm animals, old buildings, and the historic barn.  There have been as many as 4,000 people on a given day. The attraction has been closed as of late due in part to the COVID-19 pandemic. 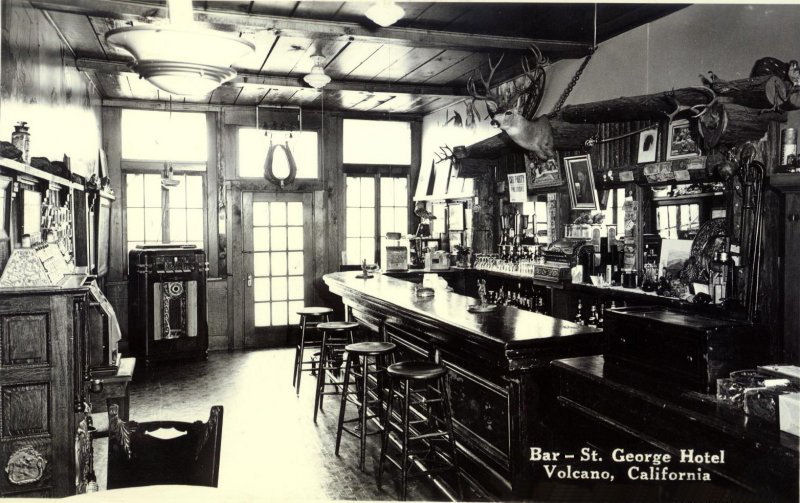 The St. George Hotel is Volcano’s largest structure.  Dating back to 1863, this three-story brick hostelry is the fourth hotel to stand on this site, the previous three being destroyed by fire.  The Eureka House was the first hotel on the site, built sometime prior to March of 1853, as John Doble recorded attending a ball there in his diary.  It burned to the ground on September 4th of 1853.  Doble reports seeing some of the boarders “washing” the ashes the following day in an effort to recover lost nuggets.  The Myers rebuilt their Eureka House, opening with a grand ball on December 23rd, 1853.  They had rebuilt with wood.  Henrietta George, the wife of Benjamin George, purchased the hotel for $2,000 on June 1st of 1854, at which time it became known as the “Empire House”.

A fire on October 29th of 1859, the work of an incendiary, broke out in an uninhabited building on Consolation Street.  The Empire was among the many buildings destroyed by the blaze.  The Georges suffered a loss estimated at $6,000.  Undaunted, they rebuilt of wood.  The new hotel was renamed the St. George and it lasted until October of 1862, when it and all the other buildings on the block went up in flames, started by a fire in the hotel itself.

The last time the hotel was rebuilt, it was constructed of brick, which probably saved it from destruction in 1868 when one of that year’s many fires surrounded the building.  Today the three-story brick building with the wooden balconies is the first thing you’ll see upon entering the town.