Pine Grove is located on Highway 88, also known as the “scenic route” to the Lake Tahoe region. At an elevation of 2400 feet, Pine Grove sits at a perfect transition altitude where oaks and pine trees share the landscape, and a light dusting of snow falls each year. Home to several family restaurants and cafes, and a wide range of shops and services, Pine Grove is just an hour from Kirkwood Ski Resort. 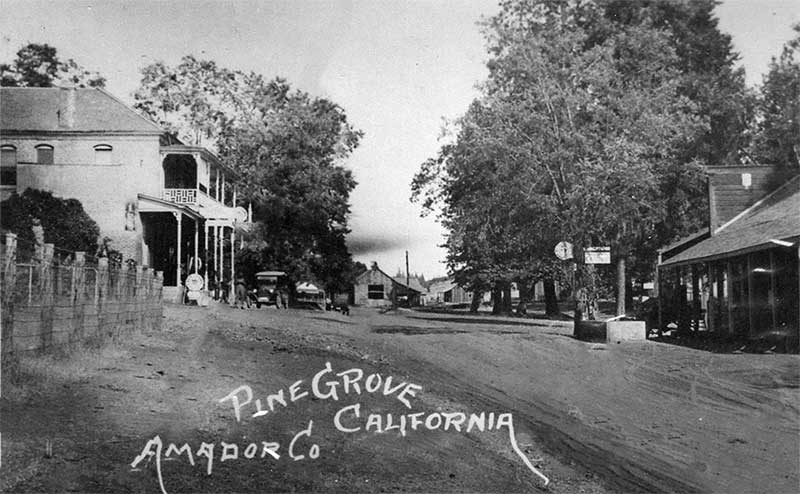 The current boundaries of Pine Grove include the former mining towns of Clinton and Irishtown.  Prospectors in 1849 traveled from the Mokelumne River through Clinton (Pine Grove) on the way to the diggings in Volcano.  In the early 1850’s, the camp of Clinton became a market town, supplying placer miners of the middle and southern forks of Jackson Creek, and later the shallow quartz mines around Irishtown.  As a stop on the stage road between Jackson, aqueduct City and Volcano, Clinton grew and by 1852 had 100 clapboard and canvas houses and the areas only hotel.  The camp was predominantly occupied by Mexican, Chilean and French Miners. 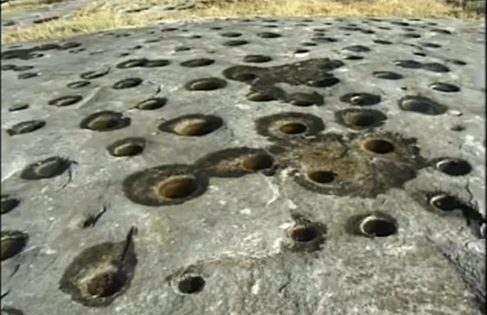 The annual cycle of native life that revolved around the little meadow was dramatically altered by James Marshall’s discovery of gold at Coloma in January 1848. Miners poured into this area, forcing the Miwok out of their traditional patterns of residence and subsistence. Prospectors and both hydraulic and quartz mining operations eventually surrounded the area. Mine tailings can still be seen today in the park’s ravines.

Though mining was the dominant economic activity in this area during the 1850s, agricultural enterprises were also attempted. Several farms and ranches were established in the area, with one of the first located in the meadow area of the present-day park. In June 1852, one miner wrote in his diary, “They are mowing their grass and barley on the flat and offered me $3 a day to mow.” The diarist declined this offer and hastened to nearby Volcano, where a miner’s wage was $6 a day.

Reminders of early-day Amador County ranching and farming activity are dotted throughout the park, including a farmhouse and outbuildings, a garden site, orchards, livestock pond sites, and other traces of farm life. By 1868 the property belonged to the Else family, who grew barley and other grain crops, raised cattle, and planted an orchard. The small stream that runs through the park is still known as Else Creek.

William Blakely acquired the property in the 1870s. In the late 1880s, he sold about 160 acres to Serafino Scapuccino. Scapuccino tended the orchard, raised cattle, and developed a truck garden. He is said to have welcomed the Miwok, who sometimes camped in the meadow, gathered acorns, and held ceremonial events at the old village site. He also put a fence around the “great rock” to protect it.  After Scapuccino’s death, his family continued to hold title to the property until the 1950s. At this time the surviving members, James and Serafino, Jr., became concerned that development pressures would eventually destroy the scenic, historical and archaeological value of the meadow and its unique bedrock mortars. A friend suggested that it might be possible to preserve the site as a state park, an idea that found immediate support in the nearby town of Volcano.

A campaign to save the site was launched, and in 1958 the State of California acquired 48.5 acres of the Scapuccino property.  The site was formally dedicated as a state park in 1968 and was placed on the National Register of Historic Places in 1973. 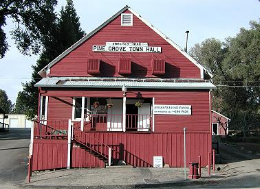 The Pine Grove Town Hall has been around since the streets were dirt and people used horses for transportation, not recreation.  There is even a rumor that someone brought their horse into the Town Hall at one time.

For many years there has been a dispute as to whether the Town Hall was built in 1879 (which is on the front of the building) or 1897.  According to Historian Larry Cenotto in an article published in the Amador Dispatch Newspaper, there was a building that housed the Pine Grove Saloon in the 1850s and 1860s.  In 1869 it was purchased for $200.00 by L.F. Walker who then sold it to the Pine Grove Division of Sons and Daughters of Temperance for the same amount of $200.00.

By 1896, the building had been used as a meeting hall for the Temperance Group and as a Town Hall for public meetings. It was in disrepair and the foundation was crumbling. The townspeople came together under the leadership of Otis L. Webster, a blacksmith.  They began raising money by holding fundraisers such as dances and dinners.

They worked into 1897 making the improvements to the building that you still see today.  In 1907 the hall officially became the Pine Grove Town Hall.

In 1954 Adolph Galli and others incorporated the Pine Grove Civic Improvement Club.

Around 1970 indoor plumbing was added. It cost the Club almost every penny they had.  After the plumbing went in there was only five cents left in the checking account.  That is when the Bingo games started. The ladies would bake cakes and cookies and serve them along with coffee. It started out small but became so popular; they would pack the building every 4th Saturday of the month.  If you come to the Town Hall, look down.  You will see dimes in the wood floor. Those were put there to mark where the tables would go during Bingo Games. The Club had around 450 members at its heyday.  When the Jackson Rancheria opened and offered Bingo, the Club’s attendance dropped dramatically.

At 9:00 p.m. on July 14, 1984, the Olympic Torch Bearer arrived in Pine Grove.  Pine Grove also provided Governor Pete Wilson with the official Christmas tree that was placed on the grounds of the Capitol in Sacramento in November, 1996.

The Hall has been used as a place of worship, a schoolhouse, a movie house, and a bingo hall and is a Red Cross Emergency Shelter. It has been rented for parties, wedding receptions, club meetings, clinics for the Health Department, a place to vote, a flea market, and Jazzercise.