Located just off Highway 49, six miles east of Plymouth, Fiddletown is a Gold Rush-era community that speaks to a simpler time. In fact, other than during two important events a year, June’s Fiddletown Flea, and September’s Fiddletown Jamboree, this sleepy little town offers glimpses of historic buildings, a relaxing walking tour, but not much in the way of other distractions or even places to spend your money!

Fiddletown was so named because placer miners took to fiddling during the summer when creeks ran too dry to mine. However, Judge Columbus Allen Purinton (who was never actually a judge in Amador County), embarrassed to be known as the “Man from Fiddletown,” successfully lobbied the state legislature to have the name changed to Oleta (after his daughter) in 1878. After his death in 1932, town residents petitioned to have the name restored to Fiddletown. 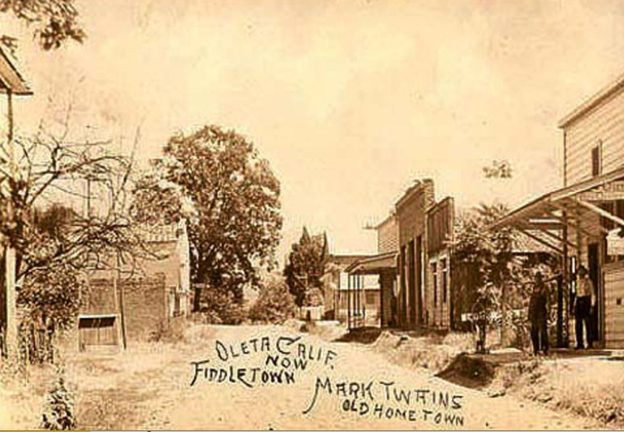 It’s probably safe to say that some early settler in Fiddletown was partial to playing the fiddle.  The town’s early years proved uneventful, its growth slow; the number of houses could be counted on one’s fingers.  All this changed in 1852 when several rich discoveries were made in the region, resulting in new camps such as American Flat, French Flat, Loafer Flat, and Lone Hill among others.  With the emergence of these camps, Fiddletown became a trading center for the region, and combined with the continued workings of the placers, the town boomed.  Tents, brush ramadas, and substantial buildings of wood, brick, and stone soon covered the landscape as the population swelled, ultimately reaching several thousand people during the mid-1850s.

Unlike the neighboring lowland camps, Fiddletown lacked the deep quartz mines which would have sustained it when the placers played out.  So when the gold began to go away, so did the people.  The town never really gave up the ghost; however, as it remained somewhat of a supply point for the region and home to many of its original settlers, Fiddletown didn’t disappear, but it died in early February of 1878.

Due to the actions of Judge Columbus Allen Purinton, a petition was circulated, signed, and submitted to the state legislature requesting that the name of the town be changed to “Oleta”.  Why?  Apparently, Judge Purinton, who was never a judge in Amador county, was embarrassed to write “Fiddletown” as his place of residence, after becoming know in San Francisco and Sacramento as “the man from Fiddletown.”  The bill sassed quickly and soon gathered the governor’s signature to make it official.  Fiddletown was dead.  Long live Oleta.  But as you may have noticed, the town is once again known as Fiddletown.

In 1932, during the eighty-third-anniversary celebration of the founding of Fiddletown (Oleta), visitors and residents alike chanced to wonder, why the name was ever changed.  Fiddletown seemed much more historic and right.  By this time it didn’t take an act of legislature to change the name of an unincorporated town.  All you had to do was petition the postmaster to change the name of the town’s post office.  So once again a petition circulated in Fiddletown (Oleta), upon which sixty-four residents signed their names.  Copies were sent to the U.S. Postal Department and the Postmaster-General, and in early June of 1932, the news came to town that on July 1, 1932, Oleta would die.  Long live Fiddletown! 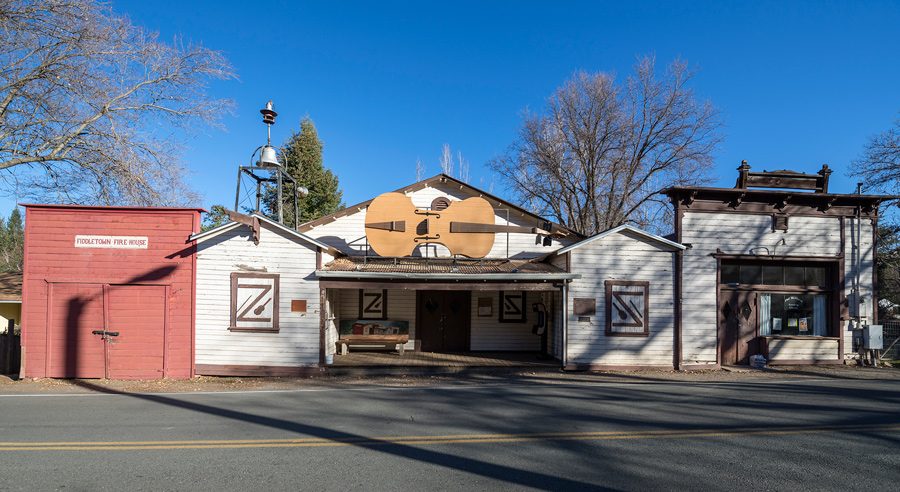 Holding maybe the largest fiddle in the world.  The fire house is to the left with bell on top of the building.  A fanciful tale is told regarding the naming of Fiddletown.  As the story goes, the camp was first settled by a group of prospectors from Missouri in 1849.  When it came time to name the place, one of the elders Missourians complained of the younger men: “They are always fiddlin’……..call it Fiddletown.”  Another story gives credit to German fiddle players, while Edwin A. Sherman relates in his reminiscences of an old lady who claimed her family were the first settlers at “Violin City,” so-called because her husband, daughter, and two sons all played the violin. 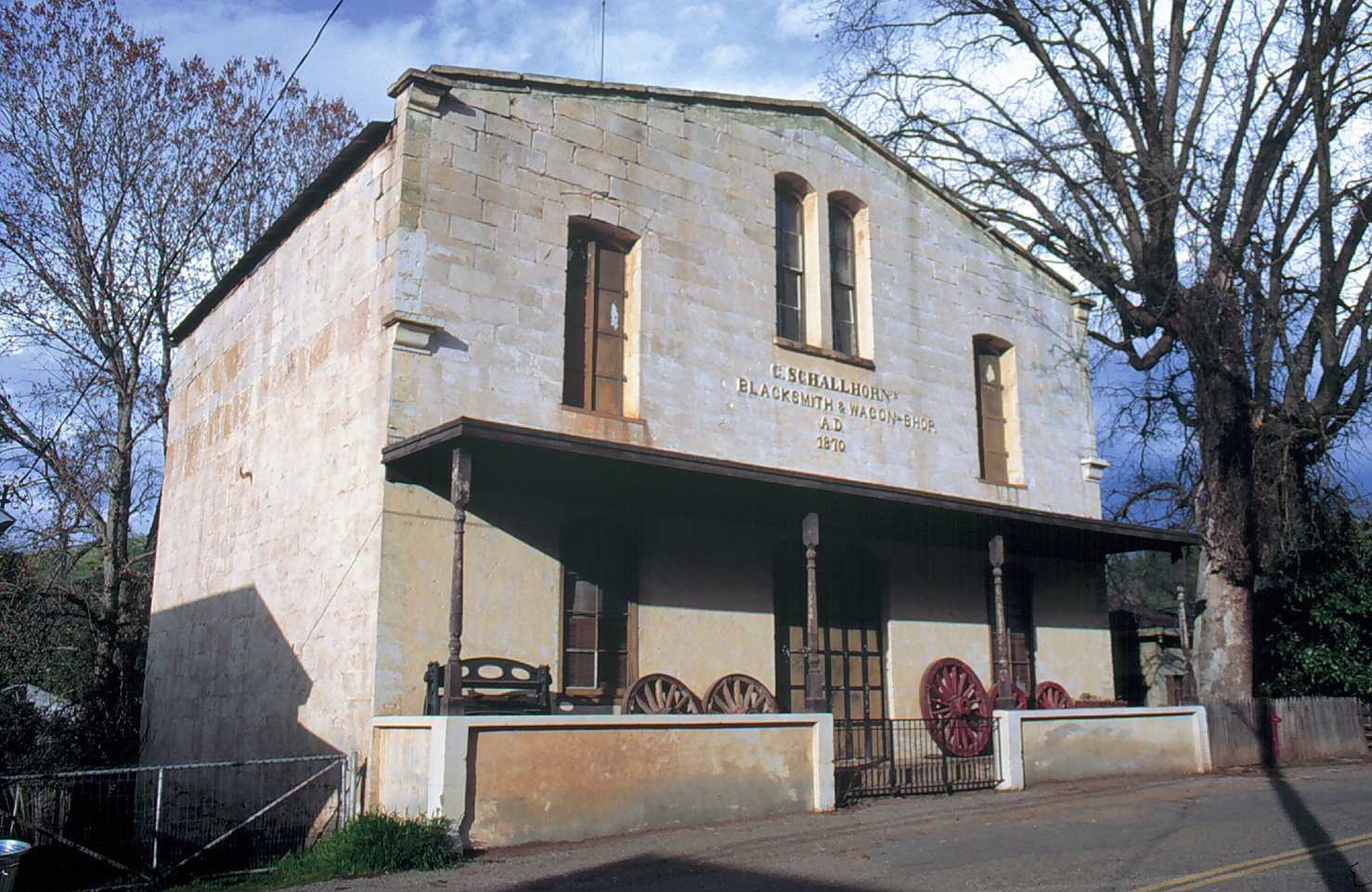 The Schallhorne Blacksmith and Wagon Shop is the largest, the tallest, and the most impressive building in Fiddletown.  Located near the east end of town, this excellently constructed building was erected in 1870 of rectangular hewn blocks of Valley Springs rhyolite tuff which was quarried about one and a half miles east of town.  Rhyolite tuff, a light brown stone commonly found throughout the foothills of the Sierras, is easily worked when first quarried and then hardens after exposure, making it an excellent building material.  The Schallhorne building is without a doubt one of the most striking and unique structures to be found anywhere in the Gold Country.