As the main commercial hub and county government seat, Jackson is nestled in a picturesque valley at the base of Butte Mountain, and in the heart of California’s Mother Lode region. What began as a mining town in 1848 during California’s Gold Rush has grown into an economically diverse community offering general business services, furniture and housewares, specialty shops and major grocery retailers, along with a variety of restaurants. Tourists as well as residents enjoy strolling its Historic Main Street, and exploring historic monuments and sites sprinkled throughout the town, like Jackson Gate and the Kennedy Mine Tailing Wheels.

With an altitude ranging from 1200 to 1600 feet, Jackson enjoys the best of all possible weather; it’s situated just above the fog line, yet low enough to enjoy only the occasional dusting of snow in the winter, and moderately hot and sunny summers

Jackson, the city that produced more than half the gold pulled from the Mother Lode, is home to the Kennedy Mine, which at the time of its closure in 1942 was the deepest gold mine in North America, at 1802 meters; (5912 ft). That’s over a mile deep! 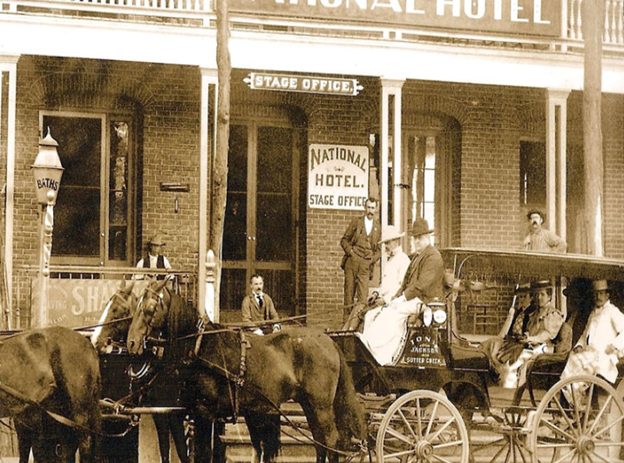 Jackson – that city which gold, girls, gambling, gastronomic delights, and government has kept lively for over 150 years – was born in the gold rush.  Gold seekers passed through the fording place where two forks of a small foothill creek met, headed for the rich Mokelumne River sand bars.  Others, dead broke, or enriched, returned via Jackson while traveling to Stockton or Sacramento.

Who stayed?  Probably no one in 1848, but a later day obituary said that one Louis Tellier, a 28-year old Frenchman via St. Louis and the Sandwich Islands, set up his trading tent by the forks in January 1849.

Had there been a poet on-call he might have dubbed the place Springford or Fordsprings. One story notes that the spring became littered with discarded bottles, so Spanish for “place of bottles” or Bottileas it became–even though there’s no such word in Spanish.  Sometime before the fall of 1849, Bottileas became Jackson Creek.  Maybe it was named after New York native Alden Appolas Moore Jackson or Andrew Jackson.

When gold quartz was discovered in the county in 1851, the only major quartz mine south of Sutter Creek was the Oneida, a good two miles away. Nonetheless, the camp became that day’s regional shopping center, and miners flocked to the place.

In 1851, at least three events ensured the camp’s permanency: it got a post office, stagecoach service, and the spoils of the Calaveras County seat. By 1852, politicians in Jackson tried to create a new county. When secession attempts failed in1852 and 1853, Jackson incorporated.

When Amador was organized as a new county in 1854, Jackson eked out a win over Volcano to become the new county’s county seat.

Fixary & Co., a French firm that started in 1851, erected the first brick structure in the summer of 1854. One account that summer said Jackson “has over 100 frames, some two-story.” Later that year the thick-walled, two-story brick building (today’s Masonic Building) was constructed at the corner of Broadway and Water.

It wasn’t until 1855 that fire destroyed a major portion of the town. That blaze was a mere introduction to the town-wide conflagration that destroyed most of Jackson on August 23, 1862. If you look behind modern window treatments and various facades in downtown Jackson today, you’ll discover buildings that arose following the 1862 great fire.

While Jackson had quartz mines from the 1850s, none of them – not even the famous Kennedy or Argonaut on its outskirts – were continually profitable until late in the 19th century. The Kennedy didn’t hit real, sustained pay chutes until 1885, and the Argonaut didn’t for another decade or more. But once started, their depths disgorged pay ore almost continuously until World War II shut them down.

Jackson, in 1905, incorporated as a city. Its first mayor was V.S. Garbarini, the mechanical genius. Its other first trustees were George W. Brown, W.E. Kent, William Tam, and the Dispatch publisher, William Penry. 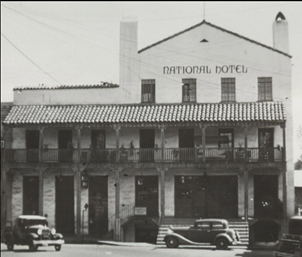 This is probably the second inhabited site in downtown Jackson.  Ellis Evans came in 1850 and had his butcher shop here.  Then with partners D.C. White and Armstrong Askey, they built a two-story wooden hotel named the Louisiana House.  The Louisiana House was destroyed on August 23, 1862, when the devastating fire swept through the town, burning all but the brick buildings to the ground.

By spring of 1863, the same owners erected a new brick hostelry and renamed it the National Hotel, that being more politically prudent during the civil war.  Over the years owners extended it and added a story.  The late John Wayne was a big loser in an epic poker game here back in the early 1960s. 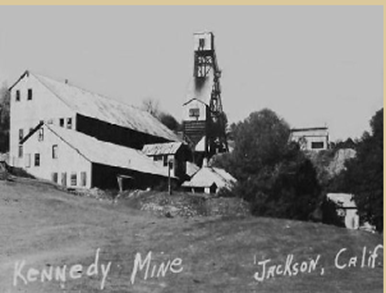 The Kennedy Mine is a little more than a mile northwest of Jackson and east Highway49.  The original claim was made in 1856 by Andrew Kennedy and since then has been Consolidated with several other claims.  It was a minor operation until 1871 and was inactive between 1875 and 1885.  From 1885 to its closing in 1942, the mine operated continuously, and on a major scale.  The Kennedy was worked mainly through vertical shafts to a vertical depth of 5,912 feet, making it the deepest gold mine in the United States.

The Kennedy Mine is named for Andrew Kennedy, who reportedly discovered a quartz ledge in the late 1850s.  The Kennedy Mining Company was formed in 1860 when he and three partners began digging shafts near today’s mine property entrance.  The mine operated sporadically until it closed in 1878.  In 1886 fifteen people invested $97,600 to reopen the under the corporate entity of the Kennedy Mining and Milling company.

There are approximately 150 miles of underground tunnels, a great deal of surface equipment, which once included the famous Jackson Gate elevator wheels and miles of flumes.  The total production was $34,280,000.  The Kennedy was closed in 1942 by order of the government while in full production.

During its early years, the mine was worked on a small scale using a whim for hoisting.  In 1871 the first powered hoist and a twenty-stamp mill were erected.  In 1872 the property was patented and by 1873 two promising ore shoots were being worked; the Kennedy on the north and the Pioneer at the south end of the mine, with 170 feet of the vein lying within the Kennedy property.  The 18-foot of the Pioneer vein led into the Argonaut mine and was to be the cause of years of litigation between the two mines.

Although production records show that the Kennedy produced $300,000 up to a depth of 600 feet, by 750 feet the ore in the south shaft gave out.  This in itself would have been bad enough, but as though to add insult to injury the ore reappeared just inside the Argonaut line.  It was discouraging enough to cause the shutdown of the Kennedy mine.

Finally, after a long period of inactivity, it was purchased in 1885 by a new group organized by F.F. Thomas, a mineralogist, and the mine began its long career as the Kennedy Mining and Milling Company.

By 1891 the North Shaft had been sunk to 1300 feet, but not without a great deal of difficulty caused by the volume of water encountered.  By 1898 the North Shaft had reached an incline depth of 2,400 feet.  There a large ore body was discovered that assured additional life for the Kennedy mine.  It was noted at that time that since 1860 the Kennedy mine had yielded $8,000,000 in gold and had paid out nearly $83,000,000 in dividends.

One of the new projects was a shaft started in 1900 about two thousand feet east of the north shaft.  It was intended that it should cut the vein at some point deep in the mine.  The engineers were not disappointed for it did just that, intersecting the east vein at 3,680 feet and the west vein at 4,000 feet.  This new shaft became the main working shaft and the marvel of the Mother Lode.

It was a three-compartment vertical shaft that eventually reached a depth of 4,764 feet, but the mine didn’t stop here for an inclined winze descended still deeper until the record vertical depth of 5,912 feet was reached.

The mine was closed in November 1942 in compliance with the U.S. Government’s wartime requirements. 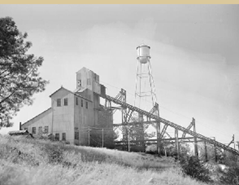 The Argonaut Mine was originally known as the Pioneer Mine.  The mine was discovered by two miners, James Hager and William Tudor in 1850.  The mine’s serious development began in 1893 when it was purchased by the Argonaut Mining Company.

In 1910 the Argonaut Mine added a new sawmill.  The Mine was doing extremely well and was a much-needed upgrade to the operation.

The Argonaut Mine was the scene of the Mother Lode’s most tragic mine disaster.  Forty-seven miners were trapped in a fire at the 3,500 foot level on August 27, 1922.

Other miners who had been near the surface poured water down the shaft in an attempt to put out the flames.  By dawn, townspeople and other miners arrived to help, but it took two and a half days for the fire to be extinguished.

It was slow going, but hopes remained high until September 18th, when a canary inserted beyond a bulkhead by an oxygen tank-equipped worker died from gases.

Rescuers began re-opening tunnels from the Kennedy Mine which had been closed since an earlier fire in 1919.  It took three weeks to reach the level at which the miners were trapped.  None survived, and evidence indicated that they had all died within hours of the fire’s breaking out.